“Audit submissions due to the Federal Audit Clearinghouse between 7/22/2015 and 1/31/2016 have been granted extensions through February 1, 2016. Since the HUD audit attestation process references the submission of the OMB Data Collection Form, HUD is mirroring this extension for nonprofit audited FASS submissions with due dates between 7/22/15 and 1/31/16. These submissions will now be due on or before 2/1/16.” [end update]

Beginning in September (2015) HUD granted a 30‐day extension of the REAC filing requirement due to delays resulting from the closure of the Federal Clearinghouse. Language used by REAC in its announcement implies that REAC filings cannot be completed due to the lack of filing with the Clearinghouse. The current language is as follows:

“A recent security breach at the U.S. Department of Census has caused the Federal Audit Clearinghouse (FAC) to be taken down. As a result, submissions of Data Collection Forms and reporting packages are not able to be made and the FAC has provided an extension until October 31, 2015. Since the HUD Agreed‐Upon procedures engagement performed on FASS submissions includes procedures comparing information in the Data Collection Form to the information submitted to HUD via FASS, HUD is extending the due date for financial statements with fiscal year ending June 30, 2015, until October 31, 2015. This is a global extension and will apply to all submissions including owner certified and audited. This may also impact December 31, 2014 audit submissions only that face the 9 month A‐133 filing deadline which the FAC extended to October 31, 2015. If needed, those auditees should file for an extension request using the FASSUB electronically.”

This language has led to many inquiries from practitioners questioning whether this means that they cannot file the REAC submission until the Data Collection Form is filed. The following is an example of such inquiry.

“Still trying to get some clarification on the blanket extension ‐ one of my coworkers recently attended one of the (AHACPA) multifamily update classes and said that you told them that there was no connection between the AUP on the HUD submissions and the data collection form, and that the extension was there just if we want it. Some of our staff agree and didn’t see what the big deal with going ahead and submitting would be; however, it reads to most of us as “you can’t complete the AUP, since part of that is comparing to the DCF, so you can’t/shouldn’t submit the HUD submission until you can file the DCF.”

So ‐ some of our filings got submitted by 9/30/15 and some got held up for this and other reasons, but it’s caused quite a bit of confusion on exactly what we are/are not supposed to do. And trying to explain to clients has been interesting. Any clarification you can provide will be most appreciated.”

AHACPA has been reluctant to answer each of these emails as we were unsure the source of the implied restriction. We have included the current AUP procedures as they currently exist: 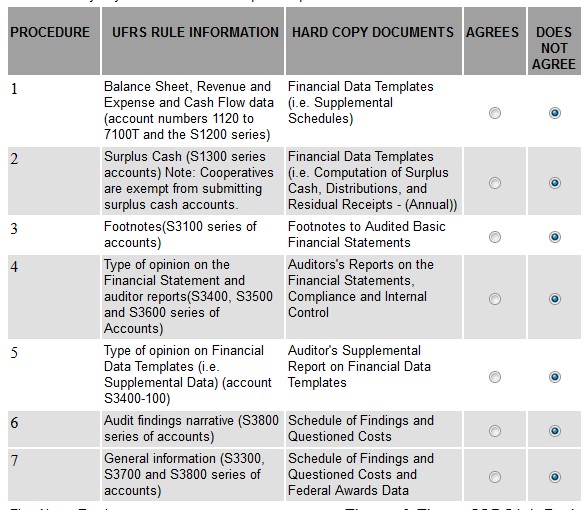 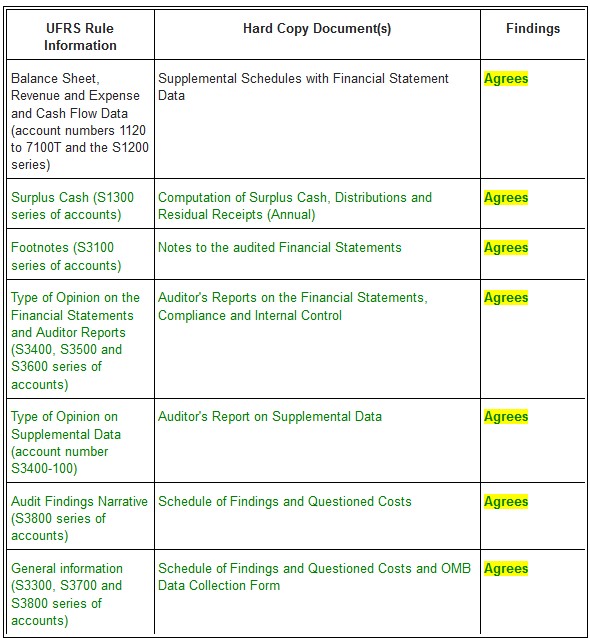 THE AUP procedures, as currently outlined, do call for the comparison of the General Information (S3300, 3700 and S3800 series of accounts) to the Schedule of Findings and Questioned Costs and Federal Awards Data. Federal Award Data is usually contained on a sheet in the AFS package and represents the “Hard Copy Data”. Other commenters have indicated a potential conflict in the following language:

“We have performed the procedure described in the second paragraph of this report, which was agreed to by XYZ, Inc. and the U.S. Department of Housing and Urban Development, Public Indian Housing ‐ Real Estate Assessment Center (PIH‐REAC), solely to assist them in determining whether the electronic submission of certain information agrees with the related hard copy documents included within the OMB Circular A‐133 reporting package.”