Is Rotation in HUD Audits a Requirement and Does it Improve Audit Results?

From time-to-time AHACPA members contact us with inquiries regarding a HUD notice advising their clients about the need to change auditors simply because the auditor has been engaged for a certain number of years. When the requests are included in written communications they take a form similar to this:

“It is noted that the same auditor has prepared the PHA’s fiscal audit since at least 2008. In order to preserve auditor independence and to ensure objectivity in the examination of financial statements, housing authorities are strongly encouraged to rotate auditors. Please review the Generally Accepted Accounting Principles (GAAP) Flyer #6, Procuring an Audit, at the website below, for continued assurance of receiving quality and objective audits.”

When such communications are received by clients the general impression of management or the board is that HUD is requiring a change in auditors pursuant to either regulation or a claim that such a change improves the quality of the audit or the related financial reporting.

The members of AHACPA strongly support the overall goal of consistent, quality audits for HUD and Rural Development entities. Clearly, independence, objectivity and professional skepticism form the basis of every high-quality audit. These core values should be and are consistently addressed by the profession. Recommendations of auditor rotation from HUD personnel or other agencies appear to be based on the unsubstantiated presumption that mandatory auditor rotation is the answer to better quality audits.

There Is No Requirement For Auditor Rotation

No requirement exists for HUD engagements of any type. Nor is there any requirement under the Single Audit Act nor Government Auditing Standards. In fact no such requirement exists in any segment of an auditor’s business that we are aware of. Further, in 2013, the U. S. House of Representatives passed a bipartisan bill (H.R. 1564, The Audit Integrity and Job Protection Act) that prohibits, the Public Company Accounting Oversight Board (PCAOB) from requiring mandatory audit firm rotation for public companies; considered by many to the audits with the greatest risks.

If This Is Not Required, Why Does HUD Appear To Mandate Such a Change?

First, we have never seen a letter that actually required a change. Most merely suggest that a change may be in order. We believe HUD field office personnel feel it is in the government’s and the client’s best interests to rotate auditors periodically. The above statement indicates that they believe that periodic rotation “…preserves auditor independence, and ensures objectivity in the examination of financial statements…” This contention is based on the premise that auditors cannot be truly independent after such a lengthy relationship with the client and are too comfortable or not sufficiently independent to issue quality financial statements. In short, auditors want to reengaged by the client next year and are therefore susceptible to undue influence.

What Have Others Said?

In 2003, the General Accounting Office issued a report to the Senate Committee on Banking, Housing, and Urban Affairs and the House Committee on Financial Services (GAO-04-216). This study was performed in response to the audit failures that had occurred. The study was developed to review existing professional literature regarding the benefits and costs of mandatory auditor rotation. In short, the GAO reached no firm conclusion that mandated auditor rotation had significant benefits. Subsequently, the PCAOB has tabled any further discussion of mandatory auditor rotation.

Audits in the affordable housing industry typically require substantially more commitment from the auditor than audits of for-profit entities. Such items as mandatory publishing of peer review results and expanded CPE requirements represent a significant investment in the industry for the auditor. Such investments may be considerable and represent the accumulation of specific knowledge in a specialized industry. Mandatory auditor rotation lessens the likelihood that a firm will “invest” in a client where the industry appears to limit audit tenure. Further, with every change the new auditor must start over learning about the client, its systems, internal control and management philosophies. In short, every change in auditors represents an additional opportunity for audit failure due to a lack of client-specific knowledge.

Audit proposals are costly for both the auditor and the client. The selection of an audit firm generally requires the client to solicit and evaluate proposals, interview likely candidates and evaluate the overall qualities of the competing firms. In general, a periodic review of audit firms may be beneficial to the client. However, such a process should not be based solely on the idea of periodic change. Rather, we believe this process is reserved for situations where dissatisfaction with the current auditors skills, or audit quality demand such a review.

Despite the issues discussed in the previous paragraph, maybe the most significant impact of mandatory rotation is on the client themselves. At every rotation of auditors, the client stuff must develop different procedures and relationships with audit staff. In fact, the most significant, comment from client personnel is that they must retrain the new auditor’s staff in their specific way of doing things. In many instances, client boards mandate auditor rotation against the will of management. Such decisions are a direct result of the lack of understanding of the amount of communication between the client and the auditor.

Finally, while some may argue that there is a perception that long audit tenure may adversely impact auditor objectivity and professional skepticism and therefore, impair the appearance of independence, we believe there are better, more effective ways to ensure that quality audits are consistently performed.

The auditing profession is in the midst of tremendous changes due to revised audit guidance from both the AICPA, OMB, the GAO and HUD. Such changes have focused significantly on enhancing auditor independence.

Current audit standards recognize that auditors consider longevity as a threat to independence. Such threats must be assessed and overcome to maintain proper professional skepticism of the auditor.

The auditor must also now disclose all nonaudit services being performed for the client and consider them as potential threats to independence. These changes are now having a significant impact on the relationship between the auditor and the client without mandatory rotation requirements. The

enhancements to the audit process are significant, but minimize the potential impacts the client personnel and maintain the vast amount of knowledge existing on the audit engagement.

Further, the recently revised audit risk assessment standards along with enhancements to the Yellowbook, A-133 and HUD audit guidance have also contributed significantly to audit quality. However, these changes have also increased the required investment of the auditor to participate in these engagements.

In closing, the member firms of AHACPA would like to reiterate that auditor rotation is NOT a requirement. We further believe there is no correlation to mandatory auditor rotation and audit quality. In fact, we believe that consistent adherence to current standards is still the best way to achieve our mutual goal of high quality, affordable audits. 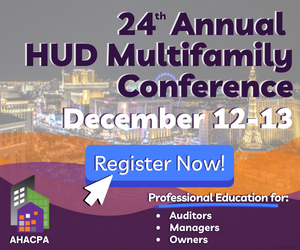